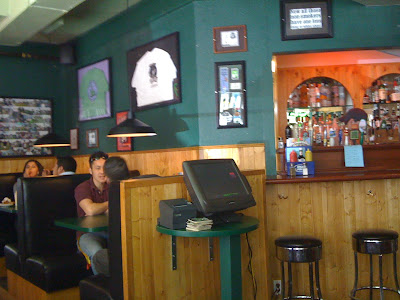 On our last day in Denver we made a lunch stop at the Cherry Cricket, a dark pub-like restaurant somewhat misplaced in the fancy Cherry Creek North area. It was also featured on Man v Food because of its great burgers. The menu is quite extensive, combining American and Mexican fare. It offers three types of burgers - the Cricket (1/2 pound), the Little Cricket (1/4 pound), and the Turkey (1/3 pound) - and a broad range of toppings. It is essentially a do-it-yourself burger. I chose a Cricket burger ($6.50) with spicy seasoned blackening ($0.50) and spicy BBQ sauce ($0.75). Rather than fries or onion rings (or 'frings'), we opted for chips and salsa and guacamole ($6.50). My wife had by this time given up on burgers and went for a Farmers salad ($7.25) with chicken (+$2.50). The salad was good and huge, the chips and salsa good and the guacamole very yummy. The burger had a big patty, which was juicy but had a bit too soft consistency, came on a nice bun and had a nice spicy taste because of the seasoning. The BBQ sauce was extremely tasty and had a nice kick to it. 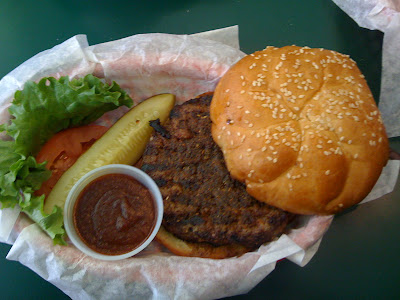 VERDICT: 90/100
Cherry Cricket is a fun place to go for lunch or dinner. It is stark and noisy, but offers a broad range of tasty foods and a chance to make an excellent burger. Next time I will definitely add some more toppings.
Posted by Grondhopper at 8:42 PM No comments: 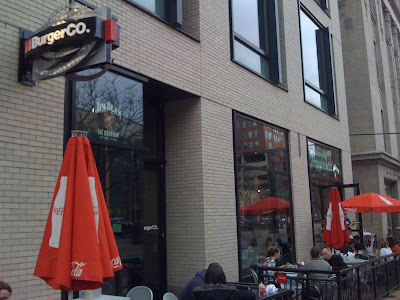 HBurgerCo is another upscale burger joint in Denver, this time in LoDo. It advertises "premium hamburgers and contemporary cocktails". Normally, this is a sign for me to move on, but we were hungry and the other options around seemed less appealing, so I settled for a third day of burgers. The menu was quite diverse, as were the choices of patties (beef, turkey, lamb, veggie). 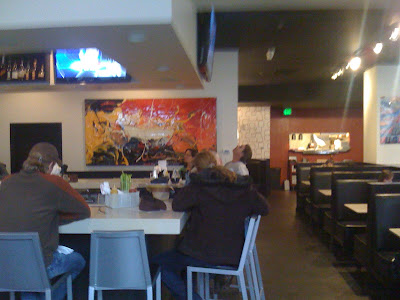 I ordered the H Burger for a steep $10.95: "Hand-formed, freshly ground 100% Angus beef, Hatch chili pepper, smoked Cheddar, sweet ‘n’ spicy bacon, Bibb lettuce, tomato and onion, served with a red pepper-tomato jam." My wife had the Grilled Ahi Tuna Steak ($12.95), which also came on a bun and with Wasabi ginger sauce, cilantro apple slaw. Both came with very crispy fries, which were not that potato-y though (that said, the spicy mayo that came with it was very tasty). While the 'tuna burger' was good, my H Burger was amazing: thick (quarterpound) burger, crunchy from outside and extremely juicy and tasty, crispy sweet bacon which blends perfectly with the sweet green chili and tangy jam on a nice bun. One of the top-3 burgers I ever had! 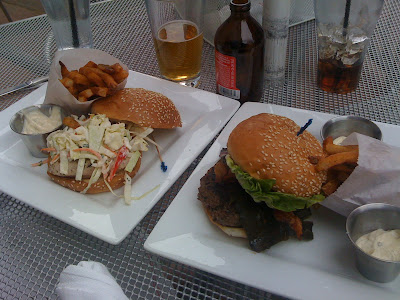 VERDICT: 94/100
HBurger is a concept burger joint with quite steep prices, but great quality. The H Burger is an absolute must! Next time I will also go for the milkshakes.
Posted by Grondhopper at 7:56 PM No comments: 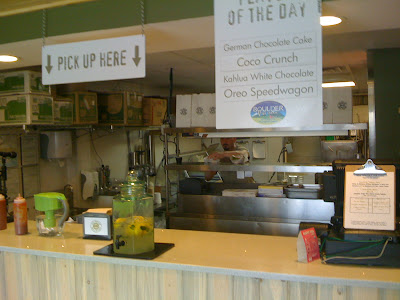 Eco-Burger opened in the trendy Cherry Creek North area in June 2010. Its motto is "morally delicious!" as it intends to make fast food in an organic and 'healthy' way, among others by using 100% grassfed beef. I ordered the Eco Burger ($6.75), my wife the Black Bean Burger ($6.75). My burger was thick and juicy (1/3lb), came on a buttered toasted brioche bun, with lettuce, tomato, fried onion, and a house-made sauce. The Black Bean Burger tasted like Mexican food on a bun; tasty, although the consistency of the 'burger' could have been more solid. I also opted for the thick (rather than thin) hand-cut fries, which were amazing! Really thick cut, they were crispy on the outside, yet cooked throughout, and well-seasoned. Definitely some of the best fries I ever had in the US! 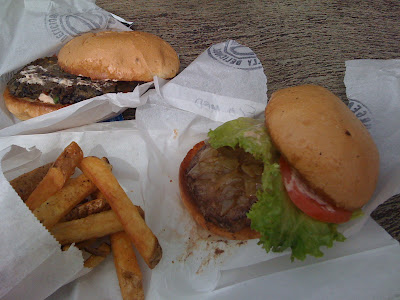 VERDICT: 93/100
Eco-Burger has great burgers, fantastic fries, and a nice atmosphere. It is the perfect place for healthy people to pig out.
Posted by Grondhopper at 7:33 PM No comments: 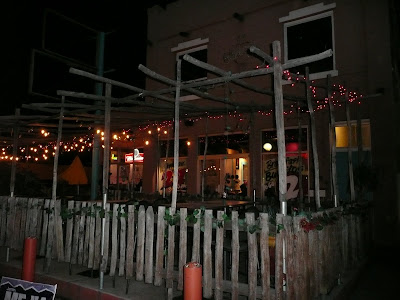 Jack-N-Grill is a Denver institution, made famous nationally in Man v Food. It currently has three locations in the Greater Denver area. We went to the original location on Federal Boulevard, which looks like a kind of alternative Mexican restaurant. 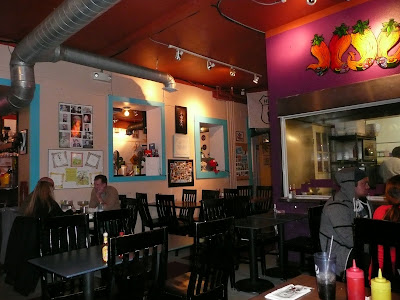 Jack-N-Grill is essentially a Mexican restaurant. It's most (in)famous dish is the 7lb burrito! At the same time, it is famous for its huge burgers. They have a list of originally named burgers, all based on a 10oz patty of "fresh ground chuck". I chose The Juarez ("The South of the Border Monster Burger ") for $9, which came with ham, a hot dog, fresh green chili, guacamole, lettuce, tomato, and mayo on a huge bun. My wife chose The Jaxx ("The King of Burgers") for $8, which came with guacamole, sour cream, bacon, fresh green chili, and cheese. Both came with "frings", i.e. a combination of fries and onion rings. 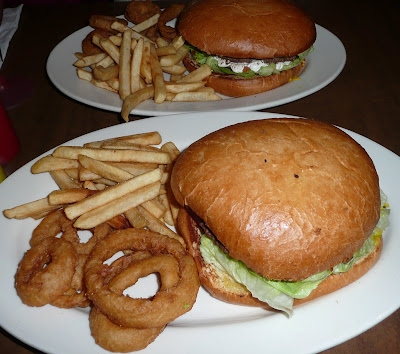 We started with chips and salsa, however, which was very good (thick, crunchy chips and an original, fresh salsa). The burgers are HUGE and very tasty. They are almost impossible to eat, but the combination of tastes is amazing. I particularly liked the hot dog, while the bacon (seemingly dipped in maple syrup) on the Jaxx was divine. The fries are thick, but a bit undercoooked, while the onion rings are also thick, but very tasty. The only thing missing was a spicy dip. 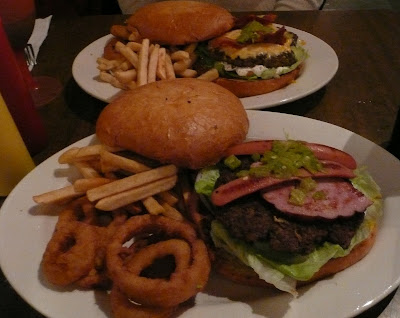 VERDICT: 95/100
I love Jack-N-Grill! First of all, it is a great alternative place with a relaxed atmosphere. Second, it combines great Mexican food with fantastic, huge, and very tasty burgers. Third, it is really affordable!
Posted by Grondhopper at 7:03 PM No comments: