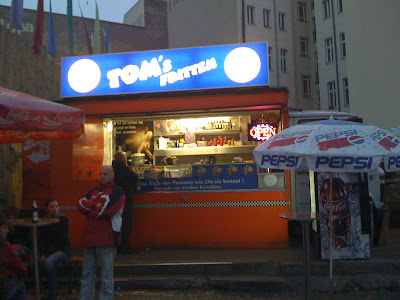 Whenever I see a stand with fries, I have to sample them. It's a Dutch thing. In any case, In Germany they think the best fries come from the Netherlands and thus market them as such (interestingly, in the Netherlands they think the best fries come from Belgium, which is true). Tom's Fritten is a stand in an alternative part of Berlin-Mitte, which almost exclusively sells fries and a huge variety of sauces (including the classic mayo and ketchup, the unlikely avacado and guacamole, and the unique jalapeno mayo). 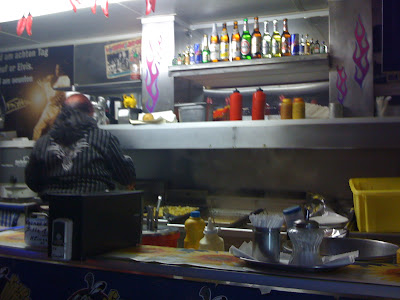 I order a small fries (2 euro) with German mayo (20 cents). I should have gone for Dutch mayo (20 cents extra), which isn't that good, but better than the oily mayo the Germans eat. Anyway, I'm happy I didn't go for the large fries (3 euro), as they taste pretty bad; fat and salty, as if they are baked, rather than fried. 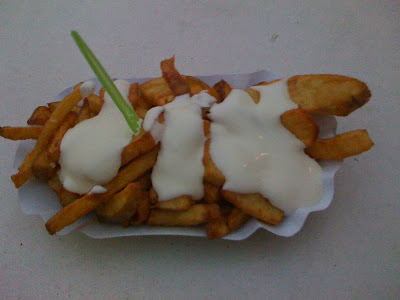 VERDICT: 59/100
If you are looking for good fries in Berlin, Tom's Fritten will unfortunately not provide them. In fact, I prefer McDonalds fries over these.
Posted by Grondhopper at 6:40 PM 2 comments: 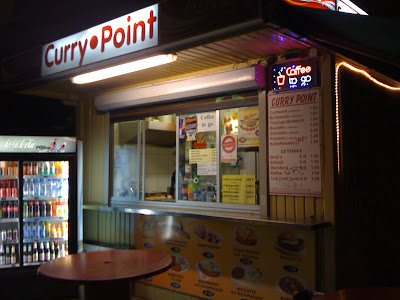 Currywurst is (allegedly) a Berlin invention, so as soon as I arrived in Berlin, I looked for a real Imbiss in search for the real thing. In my area, as in most other places in Germany, it is easier to find a kebab place than a regular sausage stand, but after a bit of walking I stumble upon what looks like the real deal. 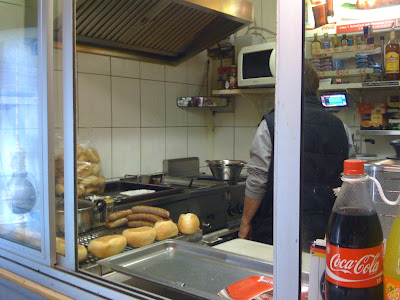 A semi-alcoholic guy runs the stand, which offers little else than traditional German sausages and meats (Wurst, Schnitzel, Frikadelle). I order a currywurst, which comes with bread and is cheap (1.80 euro). However, they deep fry the sausage (rather than fry it)!!! Consequently, the sausage is tasteless, while the bread is reheated. The curry sauce is decent though. 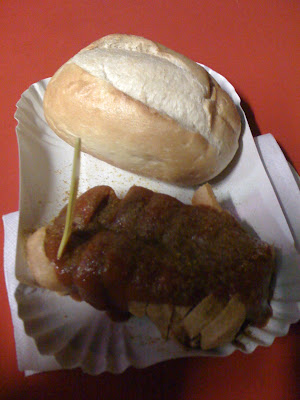 VERDICT: 55/100
Although the Currywurst was cheap, and the sauce tasty, the overall deal is very poor. So, avoid this place, you can do much better pretty much everywhere in Berlin!
Posted by Grondhopper at 5:36 PM No comments: