Many places claim to be home to a famous dish, but few can actually substantiate that claim. Ann's Snack Bar in Atlanta is home to the World Famous Ghetto Burger and that claim is only partly exaggerated; while most of the world might be oblivious to the ghetto burger, meat lovers in the US are not. In 2007 the Wall Street Journal declared Ann's ghetto burger the best burger in the country! Clearly, I had to find out for myself. 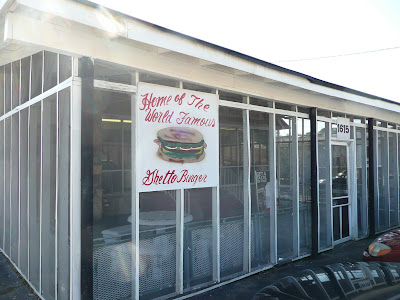 Stories about Ann's Snack Bar always discuss at least three things: (1) the burgers; (2) Ann's rules and 'tude'; and (3) the waiting times. The Snack Bar holds only eight seats and you are not allowed to enter the place when all are occupied -- which is almost always the case. The poor soul that does enter, will be told clearly and convincingly by Ann to wait outside (similarly, use of cell phones is strictly forbidden and Ann will tell you to go outside to talk). 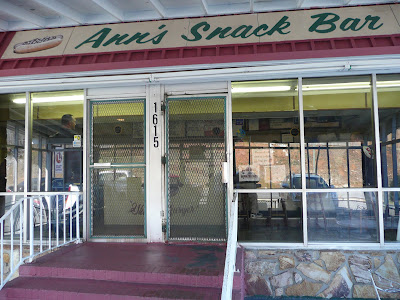 When I arrived, on a cold January (Tues)day at 11.40, ten minutes after she opened, there were exactly 8 people inside and no one waiting outside. Some five minutes later one person came out, and I took his place. Unfortunately, Ann first had to help the other seven people, which took a good 20 minutes, before she cleaned the grills and took the order of the next eight, including me. Obviously, I ordered the Ghetto Combo ($10.14 including tax), which includes the ghetto burger, french fries, and a drink (I took the overly sweet punch). 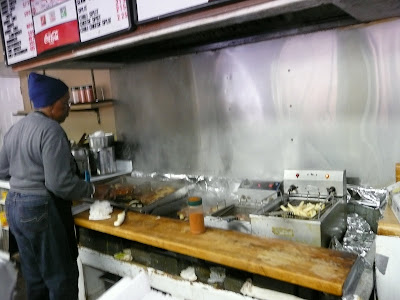 There is something unexplainable to Ann's ghetto burger. As the few haters have noted, there is absolutely nothing special or secret about the ingredients of the burger. Nothing is home-made; most comes from Wall-Mart, as she herself confessed. This not withstanding, the final result of all the ordinary ingredients is an extraordinary burger! The ghetto burger includes a toasted bun, some mayo, ketchup and mustard, a thin layer of chili, and two huge patties of meat (ca. half a pound each) which are grilled on a griddle with onion and cheese (I had mine, as always, without cheese) and sprayed several times with steak spices. Similarly, the frozen fries are packaged and deep fried in way too large quantities; still, defying all logic and experience, and I used to work in a Dutch snack bar (!), they come out very crispy and tasty. 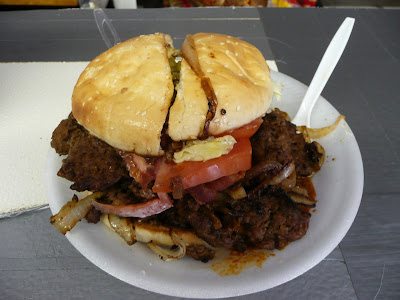 VERDICT: 98/100
Let me come clean: yes, I was intrigued by the hype, but no, I wasn't there to succeed. In fact, I hate waiting and am not a big fan of small places where strangers talk to me. In other words, Ann's Snack Bar is not really the place for me and I was ready to write a negative report. Moreover, seeing the burger being prepared, and noticing the lack of anything special or secret, I was ready to be underwhelmed. However, I was not... not at all. The ghetto burger is absolutely awesome! It is juicy, has a wealth of flavors (I liked the combination of chili and mustard), and, if you are able to finish it (as I was), sends you into a burger coma from which you arise wanting... another ghetto burger. Sure, next time I'll have a barbie I'll try to make my own, but I'm sure it will be nowhere near as good as Ann's. So, next time you are in Atlanta, and have time to kill, (even with a 'short wait', it took me over 1.5 hours!), go to Ann's. I know I will!
Posted by Grondhopper at 2:05 PM