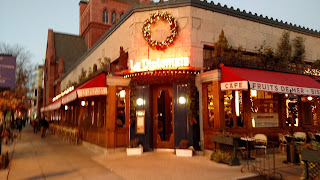 Le Diplomate is a fairly posh French restaurant in downtown DC. It looks exactly as Americans think/want French restaurants to look like. It serves a typical French menu, but with a specialty of oysters. 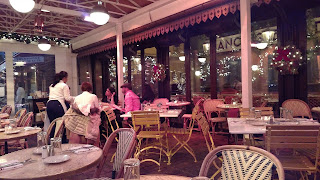 As their Hamburger Americaine ($17) makes many lists of top burgers in DC, my friend JC and I came here to try it. It is a double patty with onion, pickles, sauce, on a huge, quite fresh, brioche bun. Overall very tasty, but extremely salty. The French Fries were shoestring fries, tasty, but also very salty. The mayo was quite bad. 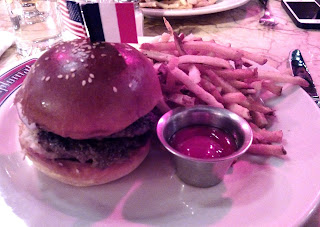 VERDICT: 87/100
Definitely a very good burger, but far too salty and far too pricey.
Posted by Grondhopper at 6:11 PM